After cancer, your never take a single birthday for granted. You ask yourself how you got so lucky to have another one. Sometimes you still wonder how many more there will be.

You learn not to mention this part to your friends and family, though, because it comes off vaguely morose, and also is not anything that anyone wants to hear from the Birthday Girl. It must upset them a little, because they go all New Jersey on you, suddenly waving their hands wildly and talking more loudly than usual, saying things like “FUGGEDABOUT THAT!” and “WHADDAYOU TALKIN ABOUT??” and “YOU’RE GONNA LIVE TO BE A HUNDRED!!” and you know that they just love you and want you to be happy forever, they just want you to forget all about that stupid cancer that was a long time ago anyway.

They can’t possibly know that you’ll never forget, and that changes the way you are in the world, but also that this is, in a way, a gift, a most exquisite thing. That it allows you to know about life in a way many don’t, which is both and neither good and bad. That it makes you cry more easily, and harder, and sometimes in private (see above) around even happy things like birthdays you thought you might not have and graduations you feared you might not see, with a feeling that I do not have the language to describe. It is not sadness – no, definitely not – but not pure joy, either. It is better. It is something that is some mixture of truth, gratitude, a knowing presence in the fullness of the journey that got you here, and also in the way it could have gone differently. It feels like it comes from the deepest part of your soul; maybe it has no name except that which is your own.

Right after my diagnosis – I was just 40 then – my friends from the old neighborhood sent a little scrapbook to me through the mail. Everyone had done a page, with happy pictures from past and present, pretty, clever captions and well wishes written by everyone. It was so nice. Someone promised a joyful celebration at 50.

Fifty? That seemed a little overly optimistic to me. Fifty was a lifetime away. Actually, it seemed more than a lifetime, since mine seemed destined to end with a four in the number. “I will never live that long,” I said aloud, woefully and somewhat melodramatically, even though I was alone in the house. I think I wanted to let the universe know that even though I was aware that I was probably screwed, I wasn’t stupid; I could at least see it coming. The numbers themselves didn’t matter that much to me; the only thing that mattered was that I needed to live long enough for my youngest to remember me, an impossible math problem with too many variables that I did – or, rather, tried to do – in my head, over and over, all the time on a loop, five plus x equals she will definitely remember. I could never figure out how to solve it and I could never find the answer key in the back of the book.

It is jarring to reach an age you wished and prayed and bargained and pleaded for, especially if you never got brave enough to actually believe you’d get there, if it felt like that would definitely jinx you. Like it was way too early in the movie for the bad guy not to jump out and – literally, in this case – scare you to death. But the universe had been listening that snowy day, and it delivered those words back to me two years ago, like a field reporter sending it back to the anchor desk. “You were dead – well, in this case, alive – wrong. We got you to 50. The rest is up to you. Back to you, Beth.”

It was time to figure out who I was and what was most important. I did this, not, as I’d always hoped and imagined – in a skinny and serene moment of meditation on my mat while outfitted in XXS Athleta gear – but instead in a way which has traditionally proven much more fruiftul for me: while blubbering to my friend who promised to write down the important parts while I ugly-cried until snot ran into my mouth.

In the list of what was most important, the thing that came out of my snotty mouth first surprised me: courage. Yes. Sniffle. Wipe nose with sleeve like a child. Quick inhale. Long, shaky exhale. Yes. I think courage might be the most important thing.

Courage begot all the other things which were important. With courage I could tell the truth. Give myself permission. Trust. Be authentic in relationships. Keep it real. Let it be good enough.

And with enough courage, maybe I could forge a celebration all of that, one of not just the birthday but of all of it, of this season whose unexpectedness in my own life made it all the more precious and welcome. Maybe if I were really brave, I could throw a party, and boldly ask my friends to come, even if it was a long way, and really inconvenient, and probably expensive, and for God’s sake, they had families of their own to take care of and couldn’t just be jetting off because I think I’m all that. I could reach to women that I admired and loved, even if it had been some time, or our long friendship had ended, or they were a newer friend who might think I was some kind of pathetic loser to invite them. If I was going to do this, I could leave no room for shame. I would have to stand fully in my space as the Birthday Girl, smile, wear the birthday crown. Own it all.

I am remembering all of that today, and it feels like the beginning, now, the beginning of being 50-something, which is absolutely my favorite anything so far.

52 is four times 13, which was the age I was in my eighth grade year, when I switched schools and knew I would have to summon every ounce of fake-it-til-you-make-it courage I could muster to overcome my shyness, all of my awkward insecurities, if I wanted to make new friends at my new school. It was hard then, and sometimes, it still is. But it was worth it then, and it’s worth it now.

52 is twice 26, which is the age I was when I had my second baby, the one I knew for sure that I would never love as much as the first. I developed a plan to hide that truth from everyone forever, and then discovered in one thrilling millisecond that I could not have been more wrong. Time and time again since, I have found that a woman’s heart has unlimited ability to absorb and sustain more love than you ever believe possible, and even a bit more than you might technically need, which – as anyone raising kids will tell you – really comes in handy sometimes. Especially when we can use some of the extra for ourselves.

52 not a multiple of 40, but we have to include 40 because it is the age when I stopped taking birthdays for granted and promised that I would never complain about wrinkles or gray hair or menopausal chubbiness around the middle, because all I wanted was to survive long enough to have those things, to watch my preschool daughter go to high school and scare me to death learning to drive and even get a little lippy sometimes. I wish I could tell you that I have kept that promise but I have not; I have complained about every single one of those things, and not just once. I feel bad about that. Still, I know how lucky I am, and sometimes, out of the blue and for no reason, I do cry with that unnamed feeling which is truth and gratitude and a knowing presence in the fullness of the journey, that I am here to break that promise, that I no longer worry that feeling normal is a jinx.

52 is just two past 50, which is the age that I learned how I felt about courage, and who I really was, and how the lantern-women felt about me, too. I learned that when you ask your lantern-women for things they will say, Of course, we’ll come. And how powerful it can be for everyone, whether it is your birthday or not, to be brave, to tell the truth, to stand in your space in the company of women you love and admire and bear witness to things that you may not be able to name or recognize until later. To remember that we are, still and always, not alone; we are all in this together.

And 52 is 13 times 4 – an age a very long time ago, before I got to be an awkward 13, or a doubting 26, or a fearful 40, or a blubbering 50, when I was just the Birthday Girl, when I knew how to stand in my space among my little friends, smiling for the camera, wearing the birthday crown.

It took me a while to find her again. But she’s back. And we are celebrating my birthday today. 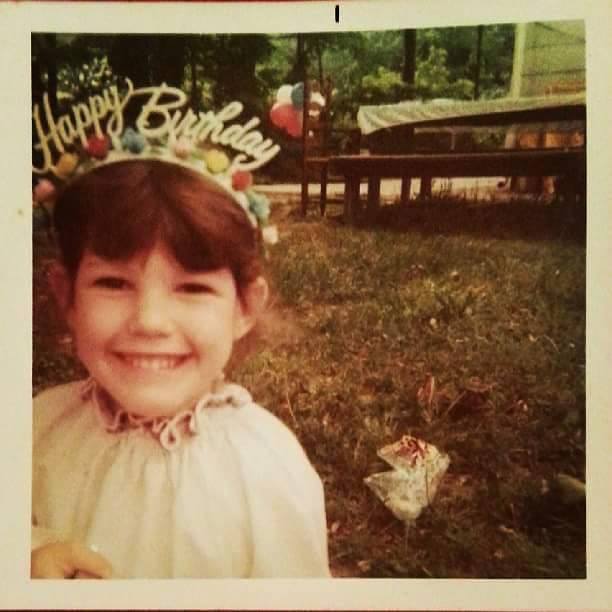 6 thoughts on “I’m the one in the crown”